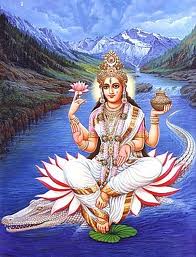 The Ganges
In Hinduism, the river Ganges is referred to as Gaṅgā and is considered sacred. Personified as a goddess, Gaṅgā is worshiped by Hindus who believe that bathing in the river causes the remission of sins and facilitates liberation from the cycle of life and death. Pilgrims travel long distances to immerse the ashes of their kin in the waters of the Ganges, bringing their spirits closer to nirvana.

Several places sacred to Hindus lie along the banks of the river Ganges, including Gangotri, Haridwar, Allahabad and Varanasi. During the Loy Krathong festival in
Thailand, candlelit floats are released into waterways to honor the Buddha and the goddess Ganga for good fortune and washing away sins.

Birth
There are several Hindu beliefs that give various versions of the birth of Ganga. According to one version, the sacred water in Brahma's Kamandalu (water vessel) became personified as a maiden, Ganga. According to another (Vaishnavite) legend, Brahma had reverently washed the feet of Vishnu and collected this water in his Kamandalu.

According to yet a third version, Ganga was the daughter of Himavat, king of the mountains, and his consort Mena; she was thus a sister of the goddess Parvati.

Every version declares that she was raised in the heavens, under the tutelage of Brahma.

Descent to earth
Several years later, a king named Sagara magically acquired sixty thousand sons. One day, King Sagar performed a ritual of worship for the good of the kingdom. One of
the integral parts of the ritual was a horse, which was stolen by the jealous Indra. Sagara sent all his sons all over the earth to search for the horse. They found it in the
nether-world (or Underworld) next to a meditating sage Kapila. Believing that the sage had stolen the horse, they hurled insults at him and caused his penance to be
disturbed. The sage opened his eyes for the first time in several years, and looked at the sons of Sagara. With this glance, all sixty thousand were burnt to death.

The souls of the sons of Sagara wandered as ghosts since their final rites had not been performed. When Bhagiratha, one of the descendants of Sagara, son of Dilip,
learnt of this fate, he vowed to bring Ganga down to Earth so that her waters could cleanse their souls and release them to heaven.

Bhagiratha prayed to Brahma that Ganga come down to Earth. Brahma agreed, and he ordered Ganga to go down to the Earth and then on to the nether regions so that
the souls of Bhagiratha's ancestors would be able to go to heaven. Ganga felt that this was insulting and decided to sweep the whole Earth away as she fell from the
heavens. Alarmed, Bhagiratha prayed to Shiva that he break up Ganga's descent.

Ganga arrogantly fell on Shiva's head. But Shiva calmly trapped her in his hair and let her out in small streams. The touch of Shiva further sanctified Ganga. As Ganga
travelled to the nether-worlds, she created a different stream to remain on Earth to help purify unfortunate souls there. She is the only river to follow from all the three
worlds – Swarga (heaven), Prithvi (Earth) and, Patala (netherworld or hell). Thus is called "Tripathagā" (one who travels the three worlds) in Sanskrit language.

Because of Bhagiratha's efforts Ganga descended to Earth and hence the river is also known as Bhagirathi, and the term "Bhagirath prayatna" is used to describe valiant
efforts or difficult achievements.

Another name that Ganga is known by is Jahnavi. Story has it that once Ganga came down to Earth, on her way to Bhagiratha, her rushing waters created turbulence and
destroyed the fields and the sadhana of a sage called Jahnu. He was angered by this and drank up all of Ganga's waters. Upon this, the Gods prayed to Jahnu to release
Ganga so that she could proceed on her mission. Pleased with their prayers, Jahnu released Ganga (her waters) from his ears. Hence the name "Jahnavi" (daughter of
Jahnu) for Ganga.

It is sometime believed that the river will finally dry up at the end of Kali Yuga (the era of darkness, the current era) just as with the Sarasvati river, and this era will end.

Next in (cyclic) order will be the Satya Yuga or the era of Truth.

RV 3.58.6 says that "your ancient home, your auspicious friendship, O Heroes, your wealth is on the banks of the Jahnavi (JahnAvyAm)". This verse could possibly refer to
the Ganges. In RV 1.116.18–19, the Jahnavi and the Ganges River Dolphin occur in two adjacent verses.

Other religious associations
According to the Hindu scriptures like Skanda Purana, the goddess Ganga is foster-mother to Karttikeya (Murugan), who was actually a son of Shiva and Parvati.

Parvati who created an image of Ganesha (son of Shiva and Parvati) out of her bodily impurities but which became endowed with life after immersion in the sacred
waters of the Ganges. Therefore Ganesha is said to have two mothers—Pārvati and Gangā and hence called Dvaimātura and also Gāngeya (the son of Ganga).

According to Devi Bhagavata Purana, Vishnu has three wives, who constantly quarrel with each other, so that eventually, he keeps only Lakshmi, giving Ganga to Shiva
and Saraswati to Brahma.

The Hindu epic, Mahabharata tells that the Vasus, cursed by Vashishta had requested Ganga to be their mother. Ganga incarnated and became the wife of King Santanu
on condition that at no stage shall he question her actions, or she would leave him. As seven Vasus were born as their children, one after the other, Ganga drowned
them in her own waters, freeing them from their punishment and the king made no opposition. Only when the eighth was born did the king finally oppose his wife, who
therefore left him. So the eighth son, Dyaus incarnated, remained alive, imprisoned in mortal form, and later became known in his mortal incarnation as Bhishma